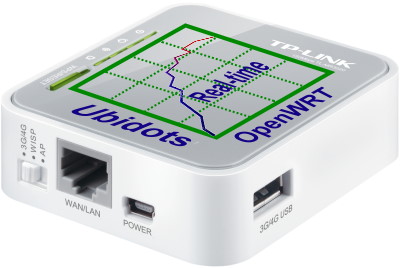 In my projects I needed a tool to monitor data in real time, the data is captured by a microcontroller and uploaded to the web using a wireless router. Initially I was trying to use yeelink since it is in chinese langguage and yet I'm a Malaysian Chinese.

One month ago, I have tried with Ubidots, there were a few things that caught my eye.

Ubidots is a cloud service to store and analyze sensor data in real-time, it is free with 30,000 dots/month data-points usage, features as follow:

There are number of well-documented tutorials and sample projects provided by Ubidots, however there is no simple way to upload data by using an OpenWRT wireless router. After spend some time studying on the TP-Link TL-Wr103ND V2 project, this "Ubidots-Lua" is developed.

Ubidots-Lua is written in Lua, it allows you to post data to or get data from Ubidots with minimum coding required. Ubidots-Lua should run on any OpenWRT wireless router, and it is able to execute from console, Shell script or as a Lua function call.

An easy way to access Ubidots is to use curl commands. curl is a tool to transfer data from or to a server, it offers proxy support, user authentication, FTP uploading, HTTP posting and more.

There is no need to run a specific installation program, just put the file to your wireless router, giving execution permission and run it.

Getting your Ubidots API key

You must know your API key, the API key grant access to your Ubidots resources.

You must setup the Ubidots data source and variable before you can upload data to your Ubidots. A data source represents a device or a virtual source, while a variable is a series of data containing values that change over time.

Widgets are custom visualizations of your data that help you extract the value of it. Example, you can display your sensor data through widgets like line charts, gauges, multi-line charts, scatter plots or maps.

When you post a value to this variable, you should able to read its value from this URL. It is so simple and yet no coding required.

It is time to post your data to Ubidots. With only a single line command, you should able to post data to your Ubidots.

You must replace api_key and deviceID with your API key and Ubidots Variable ID respectively. Upon posting this data to your Ubidots, its data is available in the widget URL immediately.

You may want to retrieve your data from a Ubidots Variable ID, but this is not often necessary since using a Ubidots widget is much more simple and flexible.

Here is a lua script demonstrate how to use the Ubidots-Lua as a function call. You need only call get_token() once.

I'm not able to install Bash onto my TL-MR3020 wireless router, the limited 4MB flash router have not enough space to installing Bash. You should get a wireless router with at least 8MB flash memory, for example: Nexx WT3020, GL.iNet, TL-WR1043ND.

Enter the following command to installing Bash shell to your router.

Here is a Bash example

More in this category: « Arduino based Electronic Queuing System Wi-Fi controlled Remote Control Car without microcontroller »
back to top
Back to Top