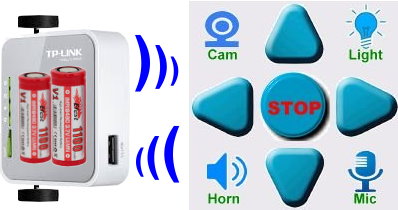 This is my first RC car control by an Arduino and a wirless router running OpenWRT. There are many OpenWRT supported routers, I'm using a TP-Link TL-MR3020 3G/4G Wireless N Router for this project since it is very slim, low power consumption and it is cheap.

This project work with the following wheel drive layout.

Connect your PC to router as shown in figure below. After flasing OpenWRT to the router, make sure you have setup the internet connection.

All the source code is available here.
1. Arduino_Wifi_Car folde: Arduino firmware, upload this sketch to Arduino
2. www folder: Web GUI and Shell Script to control RC car.
Transfer the www folder to router root directory by using WinSCP as shown in figure below You don't have enough permission to run the shell script ("car") from /www/cgi-bin folder by default. Please change the permission to 0755 as shown in figure below. 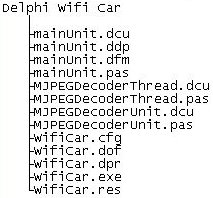 Upload the following sketch to Arduino

The serial data send from router to Arduino must start with a special character such as @ and follow by the command (eg. @2), the router may not work correctly (may cause delay) without the start character.

The Shell Script is just three lines of code, it act as the interface between router and Arduino. Name this file as "car" and save it to router /www/cgi-bin

When a request is received by the server (router)  for CGI, the parameters it receives are through QUERY_STRING environment variable. QUERY_STRING retrieves the string that follows the ? delimiter in the URL for a query, an URL containing a query string is as follows:

Lua is come with OpenWRT. If you know Lua programming, you can use it to replace Shell Script.

The web interface makes it easy to control the RC car, the program is loaded from the router hence there is not necessary to install an application to your computer. To launch the web interface, enter http://192.168.0.1/car.html from browser as shown in figure below. car.html: The main program, load the external js & css files and implement image button onClick events.
car.js: Consists of javascript function
car.css: Layout options such as image postion, colors, and fonts.
images folder: All the images which shows on the web interface
codebase folder: consists of javascript componet to create slider (dhtmlxSlider), more about dhtmlxSlider is available here.
cgi-bin folder: The Shell Script is stored here
Keyboard shortcut
The keyboard event is stored in the car.js file, you can modify it if necessary
Besides the Web GUI, I wrote another client application which runs on MS Windows computer, you can compile the source code in Borland Delphi 7. Interface between Arduino and Router

The router needs to install USB-SERIAL driver to work with Arduino, please select the correct serial driver for your Arduino. 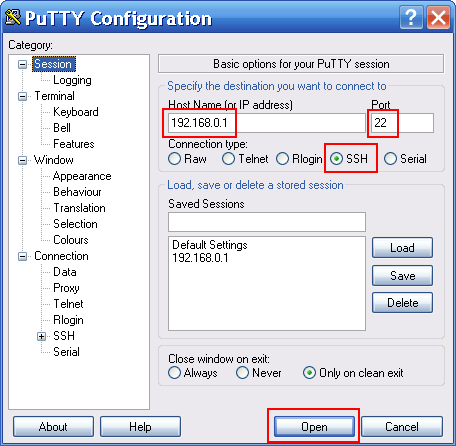 Verify router is able to communicate with Arduino

Plug in Arduino to the router USB port and restart the router, wait until the router is ready then enter command below

It should similar to this:
Testing
The first thing is to disable auto reset, otherwise the Arduino will be reset automatically each time data is sent from router to Arduino USB-SERIAL port. Here listed two simple way to disable the auto reset:
Method 1: Connect a 120ohm resistor between +5V and Reset
Method 2: Connect a 1uF capactior between Gnd and Reset, negative to Gnd and positive to Reset

Plug in the Arduino to the router via USB and use the HTTP GET method to control Arduino from browser.

Connect three LED to Arduino, first LED to D9, second LED to D10 and third LED to D6. Launch a browser and enter the URL as below: With this Arduino board, you must connect it to USB-Serial adapter and then plug in to the router via USB. It is not neccessary to disable auto reset since there is no auto reset designed in the board.

As shown in figure above is a Prolific PL2303 USB-Serial adapter,  please run opkg install kmod-usb-serial-pl2303 to install the driver.
To be continue.......
Read 84918 times Last modified on Sunday, 12 June 2016 10:21
Tweet
Published in Projects
Tagged under

More in this category: « Minimal Arduino with 8MHz internal clock Raspberry Pi Digital Signage »
back to top
Back to Top